For more than four decades, Treena Hrytsak has trusted the Misericordia Community Hospital to provide her and her family with compassionate and vital care in their moments of greatest need. 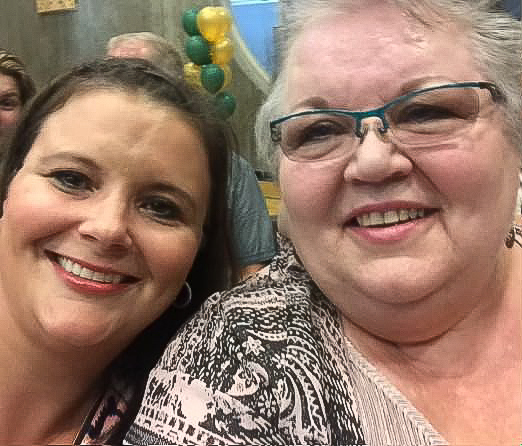 Treena and her daughter, Ria

Treena Hrytsak had never collapsed before in her life. Yet, on a wintery December day in 2021 shortly after she had returned home from shopping, Treena’s vision suddenly went black and she crumpled to the floor in the hallway of her Spruce Grove home. Thankfully, the Misericordia Community Hospital that Treena has trusted ever since she gave birth to her children there more than 40 years before was ready to provide the emergency care she needed to save her life.

When Treena came around from her severe lightheadedness in her hallway, she was confused but managed to groggily stumble into her bed where she figured she could rest until she felt better. She assumed the cold air was simply aggravating her asthma, which she’d had all her life, and that she’d feel better in the morning after some sleep.

The next day, however, Treena’s situation hadn’t improved. She still felt extremely short of breath and spent the whole day in bed, unable to get up. She struggled to walk from her bedroom to her ensuite bathroom without feeling like she would faint, and she wasn’t well enough to eat anything all day.

When Treena’s daughter, Ria, came by that evening, she became immediately worried about her mom.

“I told her I couldn’t breathe and I got emotional,” Treena says. “That’s when Ria knew things were really bad.”

Ria, who is a healthcare aide, insisted her mom needed to go to the hospital right away. But for three days, Treena stalled her attempts at getting her to go by ambulance.

“I actually told my daughter that I was having an asthma attack at first and it wasn’t until she put her foot down that I agreed to go to the emergency department,” Treena says. “I wish I’d listened to her from the beginning, to tell you the truth.”

Seeing how scared Ria was and realizing her health wasn’t improving, Treena agreed to go with her daughter to the hospital under one condition: she insisted Ria take her to the Misericordia Community Hospital.

“I had both my babies at the Misericordia and always received great care there,” Treena says. “I knew I could just leave myself in their care and everything would be okay.”

Ria helped her mom into the car and when they arrived at the west-end hospital emergency department, it turned out it wasn’t a moment too soon.

After being quickly triaged and sent for a CT scan, the Misericordia emergency doctor attending to Treena told her she was facing a life-threatening situation – she needed urgent treatment. What Treena had thought was an asthma attack was actually two blood clots, known as pulmonary embolisms, in her lungs. Left untreated, the pulmonary embolisms would continue to block blood flow in her lungs, putting her life at risk.

Treena remembers speaking to a specialist in the emergency department named Dr. Vadeanu who explained she needed to go to the intensive care unit (ICU) for a clot-busting procedure immediately.

“I was so overwhelmed hearing all of it,” Treena says. “It felt like the floor dropped from beneath me. I just thought I was having an asthma attack and here I was in the emergency department with a doctor telling me I needed to go through some life-saving process I didn’t understand. I didn’t even know what ‘clot busting’ meant!”

Yet, as overwhelmed as she felt in that moment, she was grateful for Dr. Vadeanu’s calm and patient bedside manner.

“Dr. Vadeanu was really good with explaining what was going to happen, which reassured me,” she says. “It was terrifying, but all I could do was leave myself in the care of the doctors and nurses and trust they would take care of me.”

Treena was admitted to the ICU that day, where the Misericordia team performed a clot-busting procedure to break down the clots in her lungs that had been making it so hard for her to breathe. Although she was scared and sleepless that night, she didn’t feel a thing during the procedure other than the feeling of reassurance from the kind nurses who checked on her every 15 minutes.

Treena was relieved when she was told the procedure was successful, but she learned she was still at risk. The next day, she saw a physiotherapist who got her up and walking to make sure she was able to move about as she should. After that, Treena was moved to a bed in one of the Misericordia hospital units where it was discovered that her blood sugar levels were high and needed to be managed.

Every day for the next several days, Dr. Heule, came to see Treena in her hospital room to treat her and check on her progress. Treena felt like she was in great hands the entire time.

From her past experiences, Treena knew she would receive exceptional care at the Misericordia, which is why she insisted on going there instead of another hospital in her moment of greatest need.

Several years before her blood clot emergency, Treena underwent two breast cancer surgeries at the Misericordia and still recalls how well she was treated by Dr. Olson during that difficult time in her life. While recovering from one of her surgeries over the Christmas holiday, Treena remembers being surprised that Dr. Olsen came to check on her on December 24th.

Treena says, “I told him I didn’t think I was going to see him and he said, ‘Of course I came to see you – you’re family!’”

She continues, “His bedside manner was absolutely phenomenal. I was so impressed and so grateful for the compassionate way he cared for me both physically and emotionally.”

During that time, Treena also had the opportunity to participate in the Healing Connections Program at the Misericordia. Designed to provide holistic support – body, mind and soul – for recent surgery patients, the multi-disciplinary program brings together dietitians, physiotherapists, occupational therapists, nurses and volunteers who share their professional knowledge or personal experiences about recovering from surgery.

“It was such a good program,” says Treena. “It was so helpful for me because I learned a lot from everyone involved. I was so grateful for the knowledge and the connections I gained.”

In addition to that experience, Treena also delivered both of her children at the Misericordia in the 70s and 80s. She remembers the way the difficult birth of her son – whom she lovingly describes as a 9-pound “Michelin baby” – was made easier with the help of a special birthing chair, which has since been replaced by newer technology at the hospital. She also fondly recalls the first time she experienced the special feeling of watching her newborn daughter sleeping peacefully in the little hospital bassinette next to her.

Treena never imagined that the daughter she brought into the world at the Misericordia would be the one to take her back into the same hospital for the life-saving care she would need over 40 years later.

“If she hadn’t brought me to the Misericordia, I wouldn’t be here telling my story today,” Treena says. “When I was released, I said to Ria, ‘Thank you for taking care of your mom.’”

As it can happen, it wasn’t long until Treena needed to return the favour. Less than a week after her release from the Misericordia, their roles reversed and Treena brought Ria in as the patient who suddenly needed emergency care.

As any mother would be in that situation, Treena was incredibly worried. As terrified as she had been as a patient, it was far worse watching her daughter need urgent care, and particularly since she was not able to be right next to her bed due to COVID-19 restrictions.

Yet again, relief came in the form of a compassionate Misericordia emergency nurse who recognized Treena’s distress and made time to talk to her outside and provide reassurance that Ria was being well looked after.

“The nurse I spoke to realized I was very distraught over the fact that my daughter was in there and I couldn’t see her,” Treena explains. “I thought it was very gracious for him to come out and listen to me, talk to me, explain to me everything that was happening to my daughter and take in the stuff that I brought for her. That made all the difference to me.”

Once Ria was admitted to the hospital from the emergency room, Treena was able to visit and felt tremendously relieved her daughter had received the vital care she needed.

Looking forward and giving back

“When I was brought into the Misericordia and I went through everything, I realized that's where I needed to be,” explains Treena. “I felt it was meant to be that Ria took me there because the staff took such good care of both of us.”

Since then, Treena says her family has been blessed with many beautiful moments together.

Treena says: “I look at my family and my friends and things that I've been involved with in the last six or seven months and I often think, ‘This is a great day. I'm having fun and I’ve been with people I love.’ I’m so grateful the care at the Misericordia hospital and emergency room was there when I needed it most so I could be here for all the wonderful moments I’ve had since then.”

Treena is excited about the state-of-the-art Misericordia emergency department currently under construction and set to open in 2023. The new emergency department will be nearly three times the size of the present one, which currently sees more than 50,000 patient visits per year in a space designed for 25,000.

Covenant Foundation has committed to raising $2.6 million with the help of its generous donors to support specialized medical equipment and training for staff, and family-centred features such as courtyards, art and play spaces that will help ensure patients and visitors receive the best care possible.

“We’re incredibly thankful to Covenant Foundation and its donors for helping to enhance the new emergency department (ED),” says Jo Ann Molloy, senior operating officer at the Misericordia Community Hospital. “Due to their generosity, the ED will not just have the space required to serve our patients in urgent times of need, but it will also have features that promote family-centred care, create spaces that are comforting and include new technologies and equipment for patient treatment and staff training.”

As someone whose past experiences were made better because hospital staff were equipped with leading-edge equipment, Treena is especially excited to know many more patients like her could be helped by specialized tools in the new emergency department.

“The benefit of being a survivor is you can tell the story and help others – it’s a way I can give back,” explains Treena. “I want donors to know I’m grateful for the donations they give because it helps take care of you and I, our awesome nurses, doctors and caregivers, and all the people around you in our community. Our care should be first and foremost.”

Your gift in support of the new Misericordia emergency department can make a life-saving difference for patients and families like Treena’s. Please donate today.